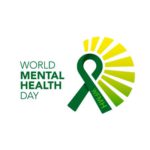 Hi, my name is Ryan Jones and I work in Prescription Services at Bridge House. I’m on the Pharmacy Contact Team dealing with NHS Urgent Medicine Supply Advanced Service submissions. I trained to become a Mental Health First Aider because I wanted to be the person I needed when I was struggling.

I wanted my colleagues to always have someone to turn to so they didn’t have to suffer in silence and that there is help out there if you’re feeling suicidal. One thing I always emphasise is that things don’t have to be at their worst before you have a chat with us! Seeing a Mental Health First Aider isn’t a last resort, it’s an opportunity to seek support, have a confidential chat, or even just have a rant if you need to!

This World Mental Health Day is all about suicide prevention and as part of this I wanted to talk about a really great event that I attended on World Suicide Prevention Day as part of my role as a NHSBSA Mental Health First Aider – the launch of the North East and North Cumbria Suicide Prevention Network. I attended this event to find out what we can do at the NHSBSA to prevent suicide and improve support for those affected. The Network aims to take a multi-agency joint working approach to enhance and support suicide prevention across the region, in addition to working towards reducing self-harm and suicide as well as fighting the associated stigma. It’s really great to see how Integrated Care Systems can work to tackle such an important issue!

Worryingly, a recent report released by the Office for National Statistics has shown that the number people that have died by suicide has increased by 11.8% – the highest level since 2002 with men accounting for over 75% of these deaths. This means that during 2018/19, 6507 families and communities have suffered the heart breaking loss and anguish that is felt when a loved one is no longer there. This is why it’s so important that we all play an active role in reaching out to those that are experiencing emotional pain.

The event featured a range of speakers from various mental health charities and organisations, but what really resonated with me were the personal stories of people who have been bereaved by suicide. In particular, Gordon Allen, who’s late wife Sally took her own life on Boxing Day in 2015. Gordon talked about the difficulties he faced after losing Sally to suicide and how much the NHS guide Hope Is At Hand helped him when he needed it most. Gordon also talked about the importance of spotting the signs of someone who may be feeling suicidal, which was also highlighted by the Zero Suicide Alliance, who have put together a free 20 minute training resource on how to identify when someone is presenting suicidal thoughts or behaviours and how to support them.

As an organisation we have very strongly emphasised mental health awareness in recent years and the aims of the North East and North Cumbria Suicide Prevention Network are strongly aligned with that of our own.

I’m proud that I work for an organisation that is striving to create a workplace where colleagues can reach out for help if they’re feeling suicidal and I’d encourage everyone to take 20 minutes out of their lives to complete the Zero Suicide Alliance, training resource – it’s a really great tool.

It’s never too late to speak to someone, whatever you’re going through, a Samaritan will face it with you. If you’re experiencing suicidal feelings you can get support from our Corporate Charity Partner Samaritans 24/7 on 116 123.