‘Bi people are just going through a phase.’
‘People come out as bi to soften the blow of coming out as gay or lesbian.’
‘You’re not bi. You are just confused.’
‘You have to pick a side.’
‘Bi people are greedy’
‘All women are bi.’
‘Bi people are attracted to anything that moves.’

Do any of these shock you? These are just some of the common biphobic misconceptions that many bi people face, as well as the accusations of failing to pick a side, going through a ‘phase’ or being indecisive and not knowing their own minds.

For many of us, we’ve wrongly learned to accept that sexual orientation is a binary choice between straight and gay and there is little room for anything other than this.

Even in the LGBT+ community, bi people are marginalised because of these narrow misconceptions. Whether we are LGB or straight we all know that we didn’t choose that identity because we know we have no control over who we are attracted to.

There’s the old saying ‘you can’t help who you fall in love with’.

The only choice we make in this is whether we act on those attractions or not. For bi people they find themselves attracted to both men and women and not because they are confused, going through a phase or being ‘greedy’, it is simply that they are who they are and should be accepted for who they are just like anyone else should be.

Biphobic misconceptions are one of the main reasons people choose not to be open about being bi but also the alarming lack of bi role models is another reason. There are too few bi people out for people to look up to, to show that this shouldn’t hold them back and that there is no fear in showing their true authentic identity. 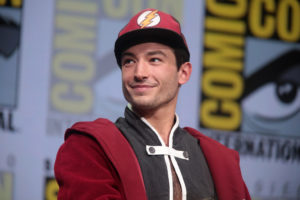 One such role model who I feel epitomises this is the actor Ezra Miller, star of Justice League and Fantastic Beasts, who is proudly bi and also identifies as non-binary. Ezra has never hidden these identities when asked, citing that they have complete support from everyone around them. Their billing in some of the largest current movie franchises has shown that their identity has not held them back; in fact, it has helped to propel their career.

But there is still work to be done.

A 2018 Stonewall study found that over a third of bi people across the UK are unable to come out to their family and friends, fearing that they would be misunderstood, marginalised or ridiculed because of their sexuality. For the same reasons, 2 in 5 people who identify as bi have not come out to anybody they work with. This is one of the reasons that the NHSBSA is committed to supporting bi visibility day on 23rd September.

We want to ensure that all of our colleagues can be their authentic selves at work and that we can support them in every way possible. Biphobic misconceptions are one of the main reasons people choose not to be open about being bisexual, and we want to change that.

So please join us as we celebrate Bi Visibility Day today (23 September), highlighting bisexual positivity and acceptance, and bringing visibility to the Bi community.

For bi visibility events near you, these are listed on the Bi Visibility day website at www.bivisibilityday.com/year2019/